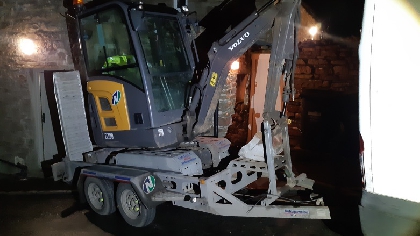 A woman and two men have been arrested in connection with a series of burglary incidents in the Hawes area.

The transit van, trailer and digger were abandoned at the scene.  No-one was hurt in the collision and minor damage was caused to the property.

Following extensive enquiries and an area search, officers spotted a red Vauxhall Astra saloon car on the A684 at Swinithwaite at 9.45pm.  It was followed and stopped at 10.15pm on the Leyburn Road at Catterick Garrison. There was no pursuit involved.  The 26-year-old woman driving the car, along with a 37-year-old man and a 22-year-old man, all from the Durham area, were initially arrested in relation to the minor collision.

However, while in custody, they were further arrested in connection with two attempted burglaries and one burglary at business premises in the Hawes area overnight between Monday 16 November and Tuesday 17 November 2020.

The suspects have been released on conditional police bail to the end of December while the investigation continues.

Witnesses or anyone with information about the incidents are asked to call North Yorkshire Police on 101, select option 1, and speak to the Force Control Room.

Alternatively, contact Crimestoppers anonymously on 0800 555111 or make a report online via www.crimestoppers-uk.org.