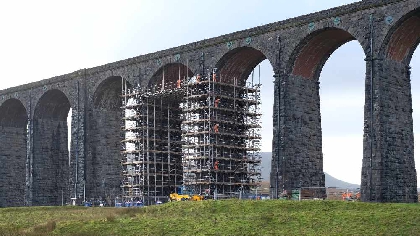 Work is underway to repair the iconic Ribblehead Viaduct, the most iconic man made structure in the Yorkshire Dales

Listed building consent has been granted to Network Rail to carry out significant repairs to Batty Moss (a.k.a Ribblehead) Railway Viaduct, arguably the most iconic built structure in the Yorkshire Dales National Park and part of the longest conservation area in the UK.

It has taken months of painstaking work to refine the plans, including laboratory analysis of ten samples of mortar from the viaduct to ensure that the mix used in the repair will be as close to the original as possible.

Network Rail has said the works will cost £2.1m and take place from now until the end of February.   Scaffolding is currently being erected, with a formal decision to grant listed building consent having been made on 6 November.

Member Champion for Development Management at the Yorkshire Dales National Park Authority, Jim Munday, said: “If you asked anyone in England to picture a train on a viaduct, they’d probably think of Ribblehead Viaduct.  It is a star attraction for our area, although it is but one of many superb Victorian viaducts in the Yorkshire Dales National Park; Smardale Gill Viaduct is probably in the same league and then there is Arten Gill and Dent Head. 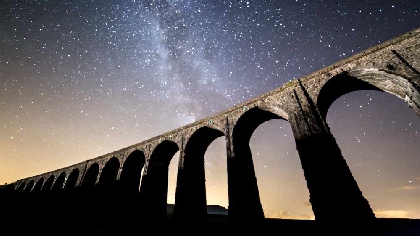 “We’re so pleased Network Rail is investing significantly in Ribblehead Viaduct and carrying out the first major repairs since the 1990s.  This was a massive application for listed building consent to deal with and I’m thankful that we’ve been able to draw on internal and external expertise to get it just right.”

Phil James, North West route director at Network Rail, said: “It’s a privilege to look after so many significant buildings and structures across the rail network, but Ribblehead Viaduct has got to be one of the crown jewels of Victorian civil engineering.  We know the structure is incredibly important both locally and internationally, and we want to give it the care and attention that it deserves so it can be enjoyed by future generations of passengers and sightseers.”