Have your say on proposals to improve major Dales road 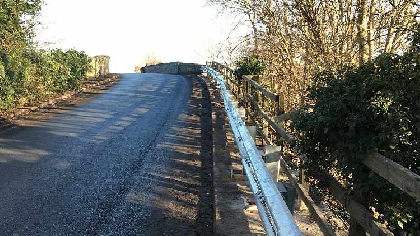 Residents are being encouraged to have their say on proposals to improve safety along the key A684 through the Yorkshire Dales.

North Yorkshire County Council is consulting on plans for a series of works to be financed by the Government’s Safer Roads Fund, which seeks to address issues on the 50 A roads identified by the Government as having the highest-risk of serious collisions in the country.

Consultations are now under way on proposals relating to several locations along the A684.  These include:

The proposals follow a successful bid for funding from the Department for Transport. Full details of all the proposals and the opportunity to comment on each of them can be found at www.northyorks.gov.uk/safer-roads-fund

County Councillor Don Mackenzie, Executive Member for Access, said: “The A684 is a vital route for residents, businesses and visitors, as it provides a gateway to the Dales and an important east to west connection for the county. We need to move ahead with the consultations on these proposals now, because delay could put our funding at risk.  “Under normal circumstances as part of a consultation such as this we would hold public events at which people could view the proposals, comment and ask questions. Unfortunately, that is not practical given the restrictions in place to tackle the Covid-19 pandemic.

“However, we are very keen for all members of the public to have the opportunity to have their say. As well as creating a dedicated web page where people can read details of all the proposals and give their views, we have also arranged for plans to be displayed at Hawes Community Office and the Co-op and Market Shelter in Leyburn.”

In addition, consultations packs are being sent to residents and businesses around the locations of the proposals in Hawes and Leyburn.

Cllr Karin Sedgwick, Member for Middle Dales division, said: “I would encourage people to put forward their views on these well thought-out proposals. I believe the short-term disruptions, particularly in Leyburn, will be worth it for the benefit of having safer roads in and around the town.”

Cllr Yvonne Peacock, Member for Upper Dales division, said: “It is vital that we hear local people’s views on these proposals, so I urge everyone to look at the plans and respond to this consultation. l am waiting with great interest to find out what people think, so please take part.”

The County Council has already undertaken some improvements on the A684 using the Safer Road Fund. This included safety work on the Spennithorne railway bridge over the Wensleydale Railway line between Constable Burton and Harmby, where a service vehicle layby was created, stop lining and signage revised and crash barriers replaced and extended.

Find information about all the proposals and take part in the consultations online at www.northyorks.gov.uk/safer-roads-fund

The consultations will be open until Friday, 24 July.