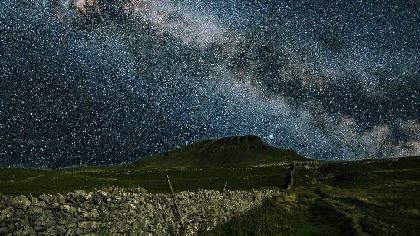 Running from Monday 23 October to Sunday 1 November, the virtual Dark Skies Week will feature a wide variety of webinars, including:

There will also be a self-guided Planet Trail for families to experience in Freeholders’ Wood at Aysgarth Falls National Park Centre.

All the events, led by expert astronomers, are free to attend and aimed at anyone with an interest in the night sky. It is hoped there’ll be a mix of virtual and live dark sky experiences ready for the Dark Skies Festival running 12 February to 28 February 2021.

Kevin Frea, Member Champion for Promoting Understanding at the Yorkshire Dales National Park Authority, said: “The Yorkshire Dales and North York Moors have some of the darkest skies in the country, and weeks like this are important to help raise awareness and understanding of our dark skies. It’s also great that, in the year we’re applying for International Dark Sky Reserve status, we’ve been able to host two major dark sky events”.

Neill Sanders, from Go Stargazing, said: “We are very pleased to be supporting the National Park Authorities and their virtual Dark Skies Week. Hopefully, these virtual events will give people a taste of what they might expect when visiting for the main festival in February 2021 when we hope to get outside to view the starry skies and observing galaxies, clusters and nebulae through our telescopes”.