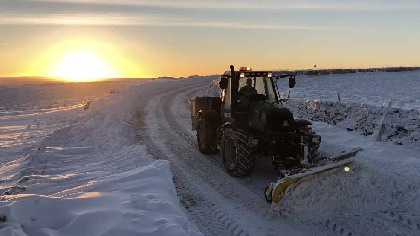 Pete Iveson from Hawes and his snow plough

North Yorkshire’s highways teams have worked around the clock to battle the extreme weather and are reassuring residents they are prepared for any more to come.  In addition to the big yellow gritters, much of the clearance has been down to local farmers and their ploughs.

Heavy snow and sub-zero temperatures gripped most of the Dales over the last few weeks, causing disruption and local farmers have been hard at work keeping essential routes across the Dales clear whist council workers have been repairing any damaged roads and replenishing grit bins which have been depleted during an exceptionally cold winter.

Since the beginning of October the amount of salt spread on the roads could fill 14 Olympic swimming pools. In the four week period from Christmas to mid-January alone, 20,000 tonnes of salt was used – enough to fill over six hot air balloons.

There are 106 farming contactors on-call and in extreme conditions they often plough ahead of the gritters. Pete Iveson ploughs and treats Buttertubs and Fleet Moss – Yorkshire’s highest road – in the Yorkshire Dales: “This winter we have seen longer and colder spells which has proved really challenging,” said Pete. “I covered 800 miles in a week earlier this year. I’m used to working around the clock but this winter I was starting at 3.45am just so I could get around the route.

“Living in this part of the county I’m used to extreme weather but this weekend I was driving through snow drifts of around 6ft. A large amount of snow coupled with strong winds proved treacherous. It is a dangerous job but residents are really grateful for the hours I put in.

The County Council has a fleet of 80 gritters which have treated thousands of runs this winter. As of mid-January the total distance was approximately 14 times round the equator of the earth.

County Councillor Don Mackenzie, Executive Member for Access, said: “I would like to thank our highways teams and farming contractors who work around the clock to make our roads as safe as possible. They have shown incredible resilience and it’s been a real Team North Yorkshire effort.

“Although we are coming to the end of winter we can’t rule out another bout of bad weather. When gritting crews are not out treating the network they can be responding to flooding in other parts of the county and repairing damage caused by this weather so we are ready for any more.

“I would like to reassure residents that we are currently refilling grit bins and heaps as quickly as we can. This process is a huge task as we have responsibility for more than 3,100 grit bins and 4,700 grit heaps.

“We are asking for patience and to use salt sparingly once they have been refilled to help sustain the stocks. The grit in the bins and heaps are for use on roads and footways only and not for private driveways.”

The plough is back in the shed for now but Pete Iveson will be there once more if the snow returns: “We are hopeful this is the last of the snow this winter but let’s see. I will be on hand if we do get any more.”