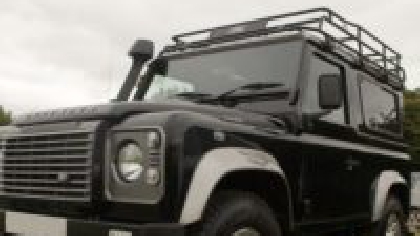 “Defend your Defender”– that’s the message from North Yorkshire Police, as action is stepped up to tackle the thieves who are targeting the valuable vehicles in the Dales.

An analysis of police information and intelligence has revealed a trend of thefts and attempted thefts involving Land Rovers in rural and urban parts of North Yorkshire.

Officers are already taking action. Police patrols – in both marked and unmarked vehicles – have been increased, and owners are being urged to take extra security precautions. A number of arrests have already been made, and investigations are ongoing.

There have been 21 incidents involving the theft of (15) or interference with (6) Land Rovers in North Yorkshire so far this year, with Craven and Ryedale being the worst-hit districts, and often close to main arterial routes such as the A59 and A64.  In most cases, the Land Rovers were parked securely, but stolen in hours of darkness.

However, there are early signs that North Yorkshire Police are turning the tide against the criminals – following the arrest of three men in connection with the theft of a Land Rover Defender from the Pickering area of Ryedale earlier this month. Officers used a drone with a thermal imaging camera to track down the stolen vehicle. Three men were arrested and have been released under investigation while enquiries continue.

In separate incidents, two other men have also been arrested in connection with offences involving Land Rovers – both investigations are ongoing.

Officers are working closely with neighbouring forces, to identify whether organised crime groups may be involved, and to disrupt their criminal activities.

Older models of Land Rover Defenders are highly valuable, due to the continuing popularity of the vehicle, and the ease of breaking them down into parts. In particular, they are still in use on many North Yorkshire farms, thanks to their reliability and off-road capability. (Four of the 21 incidents involved Land Rovers belonging to farms).

Owners of Land Rovers in North Yorkshire are being urged to follow this crime prevention advice:

Residents are also asked to be vigilant, and report suspicious activity immediately.

Inspector Matt Hagen, of North Yorkshire Police’s Rural Taskforce, said: “In line with national trends, the theft of Land Rovers is an issue in our area and it’s concerning that incidents have increased recently.”

“Land Rovers continue to be the workhorses of many farms and rural businesses – so when they are stolen or damaged it has a significant impact. That’s why it’s so important to check your security, and put in place extra measures to defend your Defender. Vehicle trackers in particular are invaluable, and can make all the difference in recovering a stolen vehicle and identifying suspects.”

“We are making life as difficult as possible for criminals. Our patrols are proactively stopping and checking Land Rovers, and using ANPR technology to target suspicious vehicles linked to thefts. Building on our recent successful investigations and coupled with strong security measures, thieves will hopefully get the message that it’s simply not worth the risk operating in North Yorkshire.”

If you are aware of any suspicious activity around Land Rovers or other vehicles, contact North Yorkshire Police on 101 or 999 in an emergency.

Your local Neighbourhood Policing Team or Rural Taskforce officer can offer bespoke crime prevention advice for rural homes, businesses and vehicles. They can be also contacted via 101.