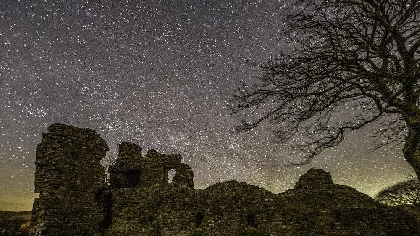 This February’s Dark Skies Festival is estimated to have helped generate more than £200,000 of income for businesses and organisations across both the Yorkshire Dales and North York Moors National Parks.

With a significant proportion of the 100-plus events in the Festival selling out early and attracting a healthy waiting list, the Yorkshire Dales and North York Moors National Parks say the popularity of this, now biannual, event underlines its status as a UK calendar fixture and its importance as a valuable off-season income booster for businesses.

Since the first joint Dark Skies Festival back in 2016, the event has grown both in terms of the number of visitors and where they travel from, as well as the breadth of events that are now organised, underlining both National Parks’ standing as a ‘go-to’ night sky destination.

Despite the first few days being hampered by gales and wintry weather, this year’s Festival attracted almost 5,000 visitors with many businesses across both National Parks saying they would have needed to replicate their events two or three times over to have cleared the waiting list.

Based on the attendance numbers and using an event evaluation calculator*, the National Parks estimate this year’s Festival will have helped generate over £200,000.

This figures relates to both direct purchases such as event tickets as well as indirect spending on items such as food and drink or overnight accommodation for a proportion of visitors.

Helen Dalton, Tourism Officer for the Yorkshire Dales National Park explains: “When we look back to the initial Festival, the events were mainly centred on traditional stargazing and astronomy evenings. While these still remain a core, and very important part of the Festival, we’ve seen how more businesses and organisations are putting their own spin on the theme to appeal to new audiences – whether it’s stargazing combined with an evening meal, a cycle ride, a paddle on a reservoir or a mindfulness session.

“We’ve also seen how more businesses and venues are working together to stage events; a prime example being the Settle to Carlisle Railway collaborating with The Station Inn at Ribblehead to put on a fantastic celebration of the dark sky that sold-out. Despite gales and snow the event went ahead with people still wanting to venture out on the train from Leeds to enjoy the evening.”

Emily Watson, Dark Skies Festival Coordinator for the North York Moors National Park echoes this, adding: “The sheer variety of events now within the Festival is attracting new audiences. For instance this year the ‘Tales of the Arabian Sky’ event at Saltburn brought together people of different faiths who learnt more about stargazing and how the night sky has a shared importance for us all.

“Visitors to this event came from as far afield as Newcastle and Manchester including a couple from Warrington who were holidaying in Staithes.

“It also proves that dark skies can generate some much-needed revenue for businesses not just during the Festival itself but also through the rest of the autumn, winter and early spring months when traditionally bookings are quieter.”

The Festival is also proving to be a useful platform for sharing the wider message that night skies are worth protecting within the context of climate change for both human and the natural world’s benefit.

Informative talks during the Festival by organisations such as the Yorkshire Wildlife Trust and the National Parks’ own dark sky officers have helped generate greater understanding of the need to preserve the quality of the skies above and the hard work that is being done to monitor and minimise light pollution.

Leaflets were also handed out to visitors giving simple advice on how they can improve their own external lighting to safeguard the night sky.

“Essentially as the Festival matures, we’re seeing the momentum among businesses grow as more recognise the benefits associated with astro tourism while visitors can take away important messages about how each and everyone of us can do our bit to protect the night sky,” Helen adds.

The next Fringe Dark Skies Festival takes place 21-30 October. Programme information, including booking details will be available in due course on www.darkskiesnationalparks.org.uk