Dave ‘with Carol’ as he fixes path 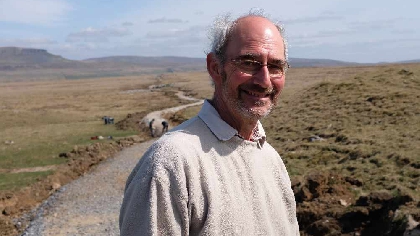 Dales Volunteer Dave Cherry making the new path on Ingleborough, with Penyghent in the distance

A Dales Volunteer took time out from constructing cross drains on a new path on Ingleborough on Sunday to speak about honouring his late wife.

Dave Cherry from Otley said he shed tears for Carol every day.  She died a year ago on 13th May.   He is taking part in an event in July to raise money for Macmillan Cancer Support.

He is also one of the Yorkshire Dales National Park Authority’s newest Dales Volunteer recruits, having being urged to sign up by his wife after she had fallen ill.

“About half way through treatment she said, ‘Why don’t you consider volunteering here?  You know why I’m saying this, don’t you?’  I realised that yes, one day she would die and I would be alone.  And it’s a lovely thing to do. I’m always with Carol, here.  I feel good doing it. We have spent so much of our lives enjoying the Dales, either walking, cycling or windsurfing,” he said.

“The place that has got the biggest meaning for me is Pen-y-ghent. It’s funny I’m looking at it right now.  I knew that Carol wasn’t well when we went up there once.  She was super fit but was struggling.  I was saying, either I’m getting fitter, or there must be something not quite right with you.  That’s what made us investigate further.  It still took another six months to realise it was ovarian cancer.”

Carol had a full hysterectomy and six cycles of chemotherapy.  As soon as she was fit again, Dave said they headed straight for Pen-y-ghent to walk and celebrate, although the recovery period did not last long.    Dave retired early from his job as an officer at Leeds City Council to help during further treatments and later her end of life care.

“I have started to do a bit of bereavement counselling myself and I’m hoping to be trained as a volunteer counsellor in the summer.  I can talk about death now, and end of life.  I’m hoping to work with Wheatfields Hospice in North Leeds and walk with people in the Dales or near Otley. I’d love to give something back that way.  Not many blokes talk about their feelings and it’s still thought that if you cry you are weak, but it’s the complete opposite.  I shed tears for Carol everyday, but not for long.”

He added that as well as raising funds for Macmillan Cancer Support, he wanted to raise awareness about cancer screening:  “I’d love women to have regular screening for ovarian cancer.  When Carol was diagnosed she would have had cancer for around two years.”

Chairman of the Yorkshire Dales National Park Authority, Neil Heseltine, said: “I'd like to wish David all the best in his fundraising efforts in honour of his late wife, Carol.   He and all our Dales Volunteers do great work for access and conservation and their love for the Dales is an inspiration.”

Dave Cherry is fundraising for Macmillan Cancer Support via Justgiving.

Volunteering brings many benefits both to the National Park Authority and to individuals who take part. The number of volunteer days on offer is an objective of the Yorkshire Dales National Park Management Plan.