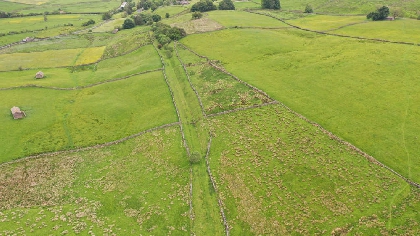 Parents’ appeals for a safe and off-road recreational route through Upper Wensleydale have been heard, the Chair of the Yorkshire Dales National Park Authority has said today.

The National Park Authority at its annual general meeting confirmed its support for the development of a multi-user route along the disused railway line between Garsdale Station and Hawes, having debated the results of a survey carried out during the spring.

A total of 2,261 individual responses were received to the survey, with people identifying as parents, grandparents, as well as those with limited mobility, expressing strong support the proposal.

The Authority will now carry out further research and begin to approach landowners and potential partners.  Creating a multi-user route is expected to be a significant capital project which would likely take several years to complete.

Chair of the National Park Authority, Neil Heseltine, said: “Members of the Authority made the point that it was no longer responsible to keep waiting in vain for railway reinstatement and that the route should be used by today’s generation of walkers, horse riders and cyclists.  Four out of five of the more than two thousand people who responded to the survey said they supported the proposal.  I would like their views to be heard.

“Three responses sum it up for me.  One said: ‘We need safe routes for people of all ages and abilities to enjoy the outdoors and to promote healthy lifestyles. I feel this is especially important as a father, as I'd like my children to enjoy these benefits.’  Another said: ‘Horse riders are normally women and children. It is too dangerous to ride on roads and too many of us and our horses are being killed each year.’  And another person said: ‘My mobility has become limited so a trail that is level to allow a mobility scooter would be wonderful.’”

Chief Executive Officer David Butterworth told today’s meeting that the response to the survey had been “extraordinary”.

He said: “The survey simply sought the public’s views on a multi user route.  Most people who responded understood that.  Some respondees however, clearly thought the National Park Authority had a choice between installing or reinstating the former railway line or working towards the development of a multi-use route.  The former is simply not an option the Authority have.  We can either look to work with partners and others to develop a multi-use route or we can do nothing other than try to protect the route in the hope that at some future date the political will and the finance might be available to reinstate the railway.

“Members discussed that point at considerable length during the March meeting and there was a prevailing view, and I would agree with it, that the Authority should now be looking at delivering one of its other objectives, rather than simply protecting the trackbed. Decades have now passed since trains ran over this line – over 60 years – which means that the benefits that might accrue to the area from finding another use are now worth exploring.”