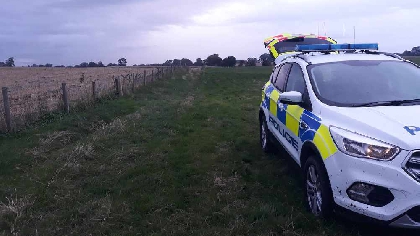 As COVID-19 restrictions ease, more people may travel to the countryside with their pets, increasing the risk of ‘sheep worrying’ incidents.

So far this year, there have been 12 reports of such incidents in York and North Yorkshire, with every district in the county suffering at least one dog attack on livestock. Concerningly, half of these have occurred in April, suggesting that incidents will continue to increase.

In response, police will be supplying posters to farmers to put up on gates and near livestock fields. Officers will also be talking to dog walkers to ensure they understand the importance of keeping their pets on leads and under control – particularly in areas that have been affected by attacks before.

PCSO Matt Cockerill, of North Yorkshire Police’s Rural Task Force, said: “My colleagues and I have seen first-hand the awful impact of dog attacks on livestock. It’s deeply distressing for farmers to find dead or dying animals, sometimes suffering from horrific injuries – not to mention the financial impact on their livelihoods.

“The truth is, any dog – regardless of how well-behaved they normally are – can very quickly get out of control around livestock. And even a dog just chasing a sheep can cause miscarriages of lambs in pregnant ewes.

“I want people to understand how important it is for the safety and welfare of livestock, and the dogs themselves, that owners keep their pets under control at all times. Otherwise, the consequences could be devastating for all parties involved.”

In 2018, North Yorkshire Police contributed to an expert report by the National Police Chiefs’ Council Livestock Worrying Police Working Group. Their research found that about one in ten of livestock attacks involve repeat offenders – owners whose dog had worried or caused damage to livestock before – highlighting the importance of reporting all such incidents to the police.