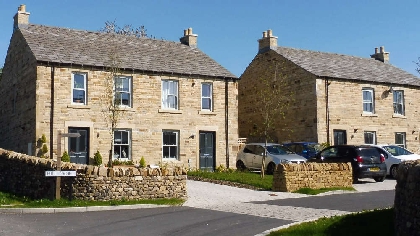 Hill Croft, Long Preston, a development of 16 affordable houses, is the cover photo for this year's Annual Monitoring Report

The number of housing completions in the Yorkshire Dales National Park has hit a 13-year high, according to an annual monitoring report.

A total of 88 homes were completed by developers and housing associations in the year to the end of March.   Of those 24 were affordable homes, the highest amount in one year since comprehensive monitoring arrangements were put in place 20 years ago.

Of the 88 completions, 40 were new build while 48 involved the change of use of an existing building, including 22 barn conversions.

The figures come – in part – from the Authority’s ‘Annual Monitoring Report – A report of planning policy implementation’, which has been published on the National Park Authority’s website.

Member Champion for Development Management at the National Park Authority, Jim Munday, said: “Action on housing – particularly affordable housing – is vital for the wellbeing of local communities in the Yorkshire Dales National Park, given the ever increasing pressure on housing stock from holiday letting and second homes.  I am delighted that after several years of disappointing housing completion totals, we finally have good news to share.  In the year up to the end of March, the housing target agreed with our local authorities in the National Park Management Plan 2019-24 was comfortably exceeded for the first time.

“It’s been particularly satisfying this year to see the completion of 33 houses across two allocated housing sites in West Witton in Richmondshire and Long Preston in Craven, as well as the start of work by Broadacres and South Lakes Housing on 49 homes in Sedbergh in South Lakeland. These developments show that landowners working in partnership with housing associations can viably build homes in the National Park.”

“We have little control over when homes get completed, but we do have the power to grant permissions and for the past few years we’ve been approving developments to help widen the supply of homes in response to need.  The policies introduced by the Authority in 2015 are clearly having an effect. Given the high rate of permissions it is hoped that the housing authorities, housing associations and local builders will achieve the housing target again this year."

A new Local Plan for the whole National Park is currently being developed.  It will aim to identify land for 850 houses up to 2040.

A fifth public consultation on the ‘preferred options’ for the new Local Plan is taking place now. It includes draft policies that set out how much affordable housing will be required on sites, informed by an economic viability study completed earlier this year.  It also proposes that all housing will be restricted to ‘primary residences’ to prevent them being lost to second homes and holiday lets. People can find out how to take part in the consultation on the National Park Authority website.