Bog in a Box is Dales museum's new centrepiece 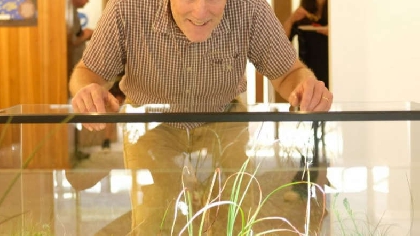 A plant-rich square metre of peatland has been placed at the centre of the Dales Countryside Museum in Hawes.

The ‘bog in a box’ installation in the museum’s circular-shaped exhibition hall illustrates how peat restoration has become the urgent conservation priority in the Yorkshire Dales National Park in light of the ‘climate and nature emergency’.  Surrounding the bog in a box are visual arts, music, poetry and film created by local people inspired by Dales peatlands.

Peat cutting tools drawn from the museum’s permanent collection, as well as photographs loaned by the Heseltine family of Kettlewell showing historical peat extraction, have also been put on display.

The special exhibition has been put together by Yorkshire Peat Partnership and is billed ‘Give Peat a Chance’.  It opened on Friday 15 July and will run until 10 October.

Tim Thom, who set up Yorkshire Peat Partnership when working at the Yorkshire Dales National Park Authority in 2009, urged people to visit during a speech opening the exhibition.  He said: “I would like to welcome people to this fantastic exhibition about peatlands.  It’s our first exhibition and I can’t quite believe it’s here.  It’s a celebration of years and years of work of peatland restoration.  Everybody has been drawn to the bog in a box, which is remarkable to look at, and very, very talented people have contributed music, artwork and poetry.”

Sarah Smout, a cellist, singer and composer from Silsden, has contributed a poem and piece of music, which she composed after hearing skylarks on a visit to Fleet Moss, a key peatland restoration site on the Richmondshire/Craven border.  She said: “I got a bit obsessed with peat bogs a few years ago.  I randomly started learning about them.  I didn’t realise how amazing they are at carbon capture.  I wanted to film music videos outdoors and got introduced to the Peat Partnership and it went from there.  What I’d like to do is raise awareness about peat bogs and the need to restore them.”

Artists Bev Parker, Hester Cox and Ann Rutherford are exhibiting work in Give Peat a Chance, while writers Gill Petrucci and Colin Speakman have contributed poems.

Ann Rutherford, a painter from Settle, collaborated with Sarah Smout and took inspiration from visits to Park Fell in Ingleborough and nearby Southerscales.  She said: “It’s been a fantastic opportunity to really get to understand peat – all the plants, the beautiful sphagnum mosses that live on the bog and create it.  It’s been a journey of discovery.  I was looking at all these bleak, open moorland landscapes and I was curious about the detail.  I played with scale, seeing as if you’re an insect crawling along in that landscape. So the bog cotton is the size of trees and the dragonflies are a bit too large. I just had fun,” she said.

Kevin Frea, who is Member Champion for Cultural Heritage at the Yorkshire Dales National Park Authority, which runs the Dales Countryside Museum, said: “The ‘Give Peat a Chance’ exhibition means people can see the amazing Bog in a Box. There’s lots of interpretation around that. Children can come and use magnifying glasses to look at the plants in the box. It’s also a chance to see artists’ interpretation of peatlands, as well Mr and Mrs Heseltine’s photographs of peat cutting which won’t be exhibited again as they’ve been loaned to us.

“The serious side of this exhibition is about learning about the vital work Yorkshire Peat Partnership is doing to restore peat bogs.  The sad fact is that despite the partnership’s work in the past decade, most peatland in the National Park is degrading, adding carbon dioxide to the atmosphere rather than absorbing it as it should.  Turning that situation around is the great conservation task of this decade in the Yorkshire Dales National Park.”

The special exhibition has been supported by the Esmée Fairbairn Foundation, Friends of the Dales, Pennine PeatLIFE and the Yorkshire Dales National Park Authority’s Sustainable Development Fund.

The Dales Countryside Museum is open seven days a week. Tickets are £4.80 and entry to the special exhibition is included in the admission price.  Children are admitted free.