Death of Her Majesty the Queen: Condolences from across the Dales 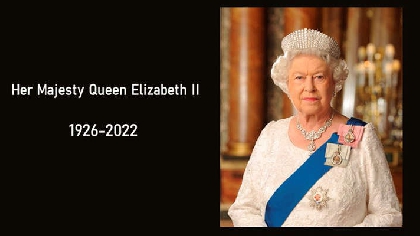 People from across the Dales have expressed extreme sadness after the death of Her Majesty the Queen.

Extreme sadness has been expressed at the news of the death of HM Queen Elizabeth II.

The Lord Lieutenant for North Yorkshire, Jo Ropner, and senior figures at North Yorkshire County Council have expressed their sadness at the announcement of the death of the Queen.  Mrs Ropner and senior councillors have paid tribute to the Queen’s 70-year reign and the monarch’s work across both the country and the globe.

A book of condolence has been opened at County Hall in Northallerton for the public to also give their own tributes to the Queen.

Mrs Ropner, who was appointed to her role as the Lord Lieutenant for North Yorkshire four years ago, said: “I had the privilege to meet Her Majesty the Queen in 2018 and I have also witnessed so many examples of her diligence and hard work, not only within North Yorkshire but also nationally and across the world.  “On behalf of the people of North Yorkshire, York and Teesside, I would like to express the condolences of the Lord Lieutenancy to the Royal Family.”

North Yorkshire County Council’s leader, Cllr Carl Les, praised the Queen’s “unstinting commitment” to serving the country, and praised her dedication to the role as the nation’s monarch.  Cllr Les said: “The Queen’s reign has already been noted as the longest ever of any of the country’s monarchs, but she will be remembered for so much more than the length of her time as the Sovereign of our nation.

“Her tireless and unstinting commitment to the role has been an inspiration throughout the whole of her reign, and her legacy will leave an indelible impression for generations to come. I would like to express my heartfelt sympathy to the Royal Family for not only their loss, but the nation’s loss too. God save the King.”

Craven District Council's Chairman, Councillor Simon Myers said: "We would like to express the deep sadness of council members and staff on hearing the announcement of the death of Her Majesty the Queen.  "This sorrow will be felt across Craven and we send our sincere condolences to the Royal Family.

"Flags will be flown at half-mast and Books of Condolence will be opened at Skipton Town Hall and at the Council offices in Belle Vue Square, Skipton. An online book of condolence is available via Buckingham Palace's website at The Royal Family - royal.gov.uk   If members of the public wish to place floral tributes they can do so in the grounds of Holy Trinity Church and Christ Church in Skipton.  Further details on events during the period of mourning will be released as soon as possible.  Our thoughts and prayers are with you all"

Richmondshire District Council has added its condolences to news of the death of Her Majesty, the Queen. “On behalf of Richmondshire District Council, and the residents and businesses of our district, I send our deepest sympathy to the Royal Family on the death of Her Majesty the Queen. The country owes her an enormous debt of gratitude for her long service to us during her reign,” said Leader of the District Council, Councillor Angie Dale. Our hearts and thoughts along with the rest of the country are with her family during this sad time.”

The council is now flying the union flag at half mast above Mercury House and at Friary Gardens in Richmond. The flags will fly at half mast throughout the period of mourning except during the proclamation periods when they may be raised in line with national guidance.

A book of condolence will open at Mercury House on Monday (Sept 12) – residents are welcome to add their messages to it during opening hours (8.45am – 5.15pm Monday to Thursday and 8.45am to 4.45pm on Fridays).

Messages can be added to the national book of mourning on the Royal Family website.