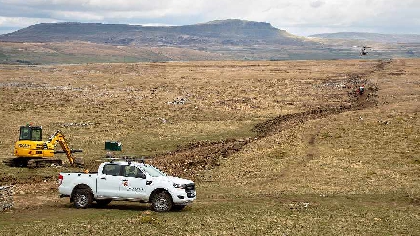 A helicopter drops aggregate onto the Sulber Nick path on Ingleborough, with Penyghent in the distance Credit: Wendy McDonnell/YDNPA

A major engineering project is taking place near the summit of the famous flat-capped Yorkshire mountain, Ingleborough, in an effort to conserve important habitat for plants such as early purple orchid and bird’s eye primrose.

The enduring popularity of the Three Peaks walking route has led to a 1.6 kilometre (one mile) stretch of path through Sulber Nick becoming badly rutted.  The damage was spreading over an increasingly wide area as people tried to avoid boggy terrain.

To fix the problem, more than 600 tonnes of aggregate, donated by the firm, Hanson UK, is being lifted to site from Horton quarry, a kilometre away, over ten days this month.

Rangers and volunteers from the National Park Authority are using the aggregate to engineer a 1.3 km path. The stone is being mixed with subsoil, won from the line of the path, to create a hardwearing and free draining surface.  Culverts and cross drains are being installed along the way, while an additional 262 metre section over peat is being flagged with reclaimed stone.

Sulber Nick is on the final section of the Three Peaks route on the descent from Ingleborough to the traditional finishing point at Horton in Ribblesdale. It is in the Ingleborough National Nature Reserve.  The works to the path are part of the three-year ‘Ingleborough Access Project’ (2019-22) managed by the National Park Authority with £180,000 funding from Natural England.  Last year’s repairs to the High Lot footpath were also part of the project.

Member Champion for Recreation Management at the Yorkshire Dales National Park Authority, Nick Cotton said:  “The Sulber Nick path has never been engineered, but anyone who has been there of late knows how much-needed these works are.  The path has become so boggy that people are diverting to an adjacent ridge, which is an important habitat for early purple orchid, bird’s eye primrose, fell wort and Yorkshire sandwort.  An engineered path, constructed in sympathy with the surroundings, will bring walkers once again to the correct path line and prevent further erosion.”

He added:  “Hanson UK has been very generous in gifting the huge quantity of aggregate required. Allowing the ranger service to use the northern tip of Horton quarry as a helicopter lift site has also been a great help.  Our thanks go to the company and its excellent local staff.”

Simon Garner, Hanson unit manager for Horton quarry, said: “We are delighted to be donating the stone needed to make the path safe and help protect the environment by encouraging walkers to use the designated route. Horton quarry is an integral part of the area and we are happy to be able to support the local community in this way.”

People using the Three Peaks Route, or walking to Ingleborough summit from Horton, are urged to follow advisory signs while the work is being completed.

Donations to the upkeep of the Three Peaks Route are welcomed.