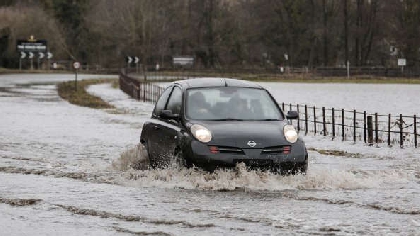 A blueprint to dramatically curb carbon dioxide emissions and introduce a wide-ranging and ambitious programme of environmentally-friendly projects in North Yorkshire is set to provide “crucial foundations” in helping tackle climate change.

Senior councillors are next week due to consider a draft strategy and are expected to approve plans to embark on a major public consultation on the document.

Members of the authority’s decision-making executive are also set to endorse a hugely ambitious bid for York and North Yorkshire to become the first carbon-negative region in the country, meaning more carbon dioxide emissions would be removed from the atmosphere than are emitted.

This ambition is seen as key for the nation to reach the Government’s target for the UK to become carbon neutral by 2050 and will rely heavily on North Yorkshire’s prized natural habitats as well as an increasing focus on developing cutting-edge industries in the green sector.

The draft strategy sets out how the new North Yorkshire Council, which will launch on 1 April, will develop work that is already underway to reduce harmful carbon emissions, which are responsible for climate change. It also outlines how the council will prepare for changes in climate.

The consultation is set to be carried out under the Let’s Talk banner, following the success of similar exercises that were carried out last year to glean the public’s views on the new council, its budget and a proposed devolution deal for York and North Yorkshire. Data has shown that more than 32,000 people engaged with the consultations from September to December, with more than 8,000 surveys completed across all three topics.

Executive member for climate change, Cllr Greg White, said: “Climate change is without question the greatest threat that the world faces, and is already impacting on communities across the globe.

“We have seen an increasing frequency of extreme weather conditions here in North Yorkshire and across the UK as a whole, which scientists tell us is clear evidence of significant changes in our climate.

“Without clear and decisive action, the situation will only get worse. However, we are committed to ensuring that we have a comprehensive strategy in North Yorkshire, especially as we look towards the launch of the new authority this spring.”

The draft strategy acknowledges that a host of measures will need to be employed and will have to be introduced across the public sector as well as businesses and North Yorkshire’s communities.

Figures show that North Yorkshire produced 5,829 kilotonnes of carbon dioxide equivalents (kt co2e) in 2020, with agriculture equating to a third of the total, transport responsible for 28 per cent and 19 per cent coming from homes.

Initiatives which will need to be adopted include producing more renewable energy, reducing the use of fossil fuels, improving insulation in homes, encouraging the use of low-emission vehicles and promoting more active travel such as cycling and walking.

The move to a single unitary authority covering the whole of North Yorkshire provides a once-in-a-lifetime opportunity to streamline policies and provide a clearly defined approach across the county.

Ourselves and the seven district and borough authorities will merge from April 1 to pave the way for a devolution deal, which is set to transfer decision-making powers and millions of pounds of funding from Westminster to local political leaders.

Council leader, Cllr Carl Les, who will become the leader of the new authority in April, said: “The new North Yorkshire Council will present us with a huge opportunity to provide a co-ordinated strategy across the county, working closely with our communities and partners.

“It will provide crucial foundations in helping reduce carbon emissions in North Yorkshire and for the whole country to achieve the Government’s target to become carbon neutral by 2050.”

Authorities have already declared climate emergencies, with us officially acknowledging the grave threat of global warming by confirming its commitment to tackle the issue in July last year.

Work which has already been undertaken in the county to tackle carbon emissions includes the installation of energy-saving LED street lighting, energy-efficient improvements to buildings and trialling the use of electric vehicles. New ways of working forced by the coronavirus pandemic, with many employees working from home instead of undertaking a daily commute, have also contributed to a reduction in carbon emissions.

The routemap for the region to become carbon negative by 2040 has been spearheaded by the York and North Yorkshire Local Enterprise Partnership (LEP) and has seen a plan drawn up to involve the public sector, businesses and communities.

Among the key projects to help tackle climate change is the BioYorkshire initiative, which is being led by the University of York, Askham Bryan College on the edge of York and the Fera Sciences site at Sand Hutton. The scheme will harness scientific expertise to develop bio-based supplies of fuel, chemicals and materials, while also supporting net-zero food production, farming and wider land use practices.

It aims to create more than 4,000 highly skilled jobs, reduce carbon dioxide emissions by 2.8 million tonnes every year in the UK, cut waste to landfill by 1.2 million tonnes annually and generate £1.4bn to the national economy.

Ambitious environmental projects such as the delivery of the White Rose Forest have also been highlighted in the route map to become carbon negative.

The initiative is set to see seven million trees, the equivalent of 4,900 football pitches or 3,500 hectares, planted in North and West Yorkshire up until 2025, with the support of landowners and farmers and funding from the Government’s Nature for Climate fund.

Members of our executive will meet on Tuesday next week (17 January) when they are expected to approve recommendations for the draft climate change strategy for the new authority to go out for public consultation, and to endorse the route map for the region to become carbon negative. If approved, the public consultation on the draft climate change strategy is set to be launched within the next month and is due to last for eight weeks.