‘Lung busting rawness’ of fell running on show at Museum 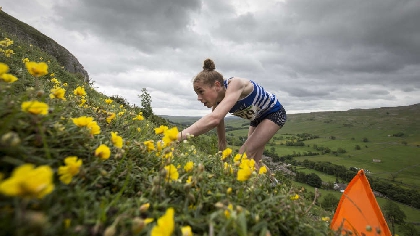 1. “I like to capture the lung busting rawness of fell running,” said Stephen Garnett, whose photographs, including this one taken at the Hawkswick Dash, are part of the Run The Dales exhibition.

Photos capturing the ‘lung-busting rawness’ of felling running, rare memorabilia from this most traditional of northern sports, and – for the first time ever – the men’s and women’s Three Peaks Race trophies, are all going on display at the Dales Countryside Museum (DCM) in Hawes.

The DCM’s latest special exhibition, ‘Run The Dales’, from 23 July to 26 September, will also include fell running shoes from the 1950s and the stories of champions such as Victoria Wilkinson and Tommy Sedgewick.

The Three Peaks Race trophies – which will once again be awarded to the fastest fell runners at this year’s race – are being described as a ‘scoop’ for the museum.

Victoria Benn, author of new book Peak Performance, which chronicles the sporting legacy of the Yorkshire Three Peaks, said: “I joke that my whole childhood was spent stood in a field somewhere.  Pretty much throughout spring and summer we were all over the Lake District, Scotland, the Yorkshire Dales, at fell races and shows.  I knew who the runners were, I knew who should win, who the competition would be between and I found it really exciting.  And now I’m a writer, it’s something I’m passionate about – capturing the stories of fell running in days gone by. This is part of what the exhibition and the associated Run The Dales website is about.

“The ‘Run The Dales’ exhibition at DCM is an opportunity for people to see the Three Peaks Race trophies up close for the first time ever.   It’s an amazing scoop for us to have them on display, as the public are allowed nowhere near them on race day.  The women’s trophy is an impressive ceramic plaque donated by Shirley Hodgson in 1991. Along with her husband Dave Hodgson, she has dedicated a lifetime of service to the race. Its first recipient was the future Olympian and women’s Three Peaks record holder, Sarah Rowell. The men’s ‘Norman Thornber Trophy’ is an intricately carved wooden plaque, invested as the Three Peaks Race trophy in 1959.”

Kevin Frea, Member Champion for Promoting Understanding at the Yorkshire Dales National Park Authority, which runs DCM, said: “Fell running is a very important part of our cultural heritage. The British Open Fell Runners Association – known as BOFRA - organises dozens of fell races each year in the National Park.  Apart from the many races, quite a number of local people can be seen running the fells on a morning and evening.  The grittiness needed to go fell running is integral to the character of Dalesfolk.

“Some of the very oldest recorded races are in the Dales, such as the Burnsall Classic, dating back to 1860.   The history of this sport and pastime, as revealed by Victoria Benn in the exhibition, is fascinating.  I do hope people will make the Dales Countryside Museum their destination for a day this summer – and perhaps try a bit of fell running for themselves, too.”

The Run The Dales project has been  possible by grants from the Yorkshire Dales National Park Authority’s Sustainable Development Fund and Great Place: Lakes and Dales.