Running the Leeds-Liverpool canal for Charity 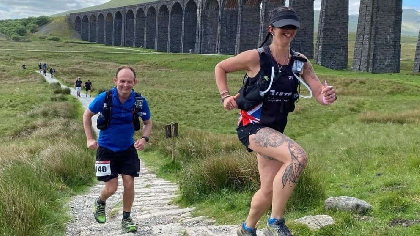 On August 27 2022, Zoe Smith, from Steeton and who works at Airedale hospital, will be running the Leeds & Liverpool Canal 130-mile race to raise funds for Airedale Hospital and Community Charity (the official NHS charity for Airedale NHS Foundation Trust).

The non-stop 130-mile race is from Old Hall St, Liverpool, along the Leeds and Liverpool canal towpath, to Office Lock, Leeds. Zoe aims to complete the race in 30 hours or less which is no mean feat; the current ladies record is 26:45 hours.

Zoe said:I started running just a few years ago when a serious back injury meant that I wasn't able to continue martial arts, and I hated every mile. I stuck at it, and got a bit better, and then joined Keighley and Craven Athletics Club and got into racing. I've done quite a few races now, but this will be the biggest one I've done. I’ve chosen to fundraise for Airedale Hospital and Community Charity because I work at Airedale and see the difference that the charity makes to patients and staff.”

You can donate and support Zoe on JustGiving: www.justgiving.com/fundraising/zoe-smith117.

If you own a local business and would like to discuss sponsorship opportunities, please contact the Airedale Hospital and Community Charity team on anhsft.charity@nhs.net or 01535 294870.