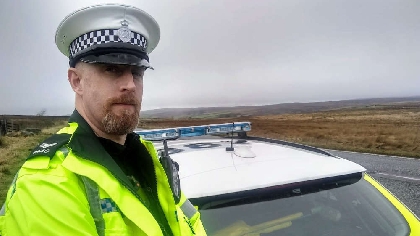 Police are gearing up to keep people safe on the county’s roads as traffic levels rise this summer.

Traffic Sergeant Pete Stringer said: “We know the most common causes of serious and fatal collisions – they’re referred to as the fatal five and include excessive speed, drink and drug driving, not wearing a seatbelt, using a mobile phone and careless driving. “We’ll be targeting all these offences in a bid to reduce collisions during what could be a very busy summer for us.”

Marked and unmarked police cars and motorbikes will be deployed to busy routes, including areas where there is a big increase in leisure traffic.

More officers have also been trained in specialist road policing skills to give an added presence on the county’s roads.  And safety camera van staff will be on the lookout for a range of offences, including speeding, mobile phone and seatbelt offences and careless driving.

In July, August and September last year police dealt with 446 collisions in North Yorkshire. There were 460 in the same period the year before.  This contrasts with winter and early spring, when the number can halve.

Sgt Stringer added: “We know from the extensive investigation work we carry out on every fatal and serious collision that most crashes are avoidable. They are due to some element of driver or rider error.  So by having a strong presence on the roads, targeting key routes and using a mix of education and enforcement we hope we can reduce collisions this summer."

“But everyone has a part to play. We’re urging anyone who uses North Yorkshire’s roads to stick to the rules and drive to arrive. Those who do that have got nothing to worry about. However, if people do take unnecessary risks that endanger themselves and other people, we’ll be there to deal with them robustly.”