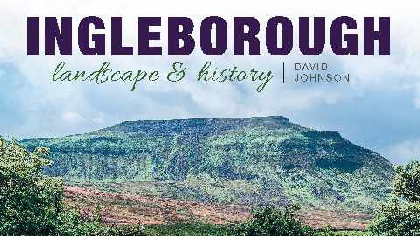 The cover of the fully re-worked and revised Ingleborough

A fully revised edition of David Johnson’s classic homage to Ingleborough is now on sale from Yorkshire Dales Millennium Trust.

Ingleborough has been fully re-worked since it was published in 2008 with new discoveries and pictures that are sure to excite those who love the classic peak.

David said: “Since the text of the original edition was completed in 2007 there have been significant developments in our knowledge and understanding of Ingleborough's story.  For example, the year of publication (2008) saw the start of an eleven-year scheme of research, led by myself, into early medieval (ie the Anglo-Saxon period) archaeology with a series of excavations around the hill. This work was extensive and ground-breaking. There has also been an impressive amount of recent work in cave archaeology, geology and glaciology in the area.

“In the light of these, and other developments, Don Gamble at Stories in Stone felt there was a need to update the first edition - which was virtually out of print anyway - and he also believed publication of a revised edition would act as a fitting climax to the five-year Stories in Stone journey. I jumped at the opportunity to revise and extend the book.”

The book, priced at £18.99, explores Ingleborough and its immediate surroundings in all its varied aspects, to create what is in essence the biography of a mountain.

David, long-time Ingleborough enthusiast and scholar, describes in an accessible, readable manner how people and landscape have interacted over the centuries which will appeal to visitors and local people alike.

Don Gamble, Stories in Stone manager, said: “The first edition was very well-received, and I was very pleased when David agreed to my suggestion for a revised version that brings together all of the new research and insight. I’d like to thank David for his work and support which has helped Stories in Stone to be so successful.”