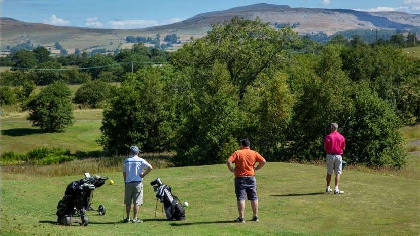 The team at Bentham Golf Course, the picturesque club with panoramic views of the Yorkshire Dales and the Lakeland hills, is marking 2022 as a milestone year, as it reaches its centenary.

The team at Bentham Golf Course, the picturesque club with panoramic views of the Yorkshire Dales and the Lakeland hills, is marking 2022 as a milestone year, as it reaches its centenary

The game of golf first came into play in the Bentham area, when a group of local gentlemen played 5 holes at Park Foot between Bentham and Ingleton in 1922. These pioneers moved their game to its present site at Bentham Moor later that same year and Bentham Golf Club was established.

In 1925, that same band of sporting gentlemen, together with a number of other men and some of the fairer sex, purchased £1 shares and created Bentham Golf Club Limited. The greater part of the land was purchased outright, with only the field for the first and ninth holes being rented. A green-keeper was employed, who doubled as a club maker and who would nowadays be classed as the ‘professional’. Under his guidance the course was constructed by the members, who also built a wooden clubhouse that sported an elegant veranda, plus changing and locker rooms.

Around 1941, the two rented fields were purchased by the club and immediately commandeered by the government to aid the war effort. Half was ploughed up and much needed vegetable crops were planted.

The clubhouse was moved further onto the course and doubled as an observer post for aircraft recognition. Rumour has it that a club member who served in the Royal Observer Corp spent most of his duty time practising his chipping and putting on the 8th green whilst keeping an eye on passing aircraft.

After the conflict was over, the ploughed land was brought back into play and the clubhouse returned to its original position, the members again helping with the construction of the greens and tees.

The club and course went from strength to strength. Around 1960, an old Army hut was purchased and attached to the clubhouse, forming a social room, kitchen and a much needed nineteenth hole – all once again made possible by the hard work of the members.

With social amenities available, membership increased and many events were organised, with catering provided by the ladies.

By the early seventies the ageing wooden clubhouse was felt to be inadequate to cope with the increasing number of members. Other factors, such as the highway authorities plans for a relief road through the middle of the dance floor, meant the Directors needed to find an alternative site! A new clubhouse was sited in its present position and was up and ready for business in the spring of 1975.

Membership continued to grow and golfing flourished at Bentham. More machinery was purchased, a full time green-keeper took over from the stalwart part-timers and over the years the greens developed into some of the finest in the north of England. Alterations were made to the course, new greens constructed, tees pushed back to lengthen holes, trees planted and minor adjustments to the cosmetics of the course completed.

In the mid 1990’s it became obvious that to stay as a nine-hole golf course would mean the demise of the club. Members were leaving to join 18-hole courses and although the club enjoyed a very strong junior section it was agreed the club must attract many more new members and visitors to survive. Eventually the directors, endorsed by the members, were able to purchase neighbouring farmland and Bentham become an 18-hole course.

Bentham Golf Course has been under the nurturing ownership of the Marshall family since 2009. They have invested heavily in the course, constantly improving the facilities and championing golf to attract visitors and encourage newcomers to the game.

In recent years, they have built luxurious lodges and glamping pods discreetly amid the fairways, offering the opportunity for visitors to ‘stay and play’, or even purchase their own golfer’s dream holiday home.

They have also created a driving range and revitalised the clubhouse as The 1922 Bar & Kitchen, open to non-golfers.

As part of the 100 year celebrations, an extra Open competition has been added to the fixtures for visiting golfers this year. Sunday 7th August is the date for the event, which will be held as a fundraiser for prostate cancer. Teams of four, with any gents/ladies combination are invited to play, and the winners prize is a 4 ball voucher to play Royal Birkdale.

To join the Centenary Open or book to play anytime, visit www.benthamgolfclub.co.uk